Have you ever talked to an Astronaut?
Live?
via Ham Radio?

The Traverse Area District Library presents, as a part of their Summer Reading Program theme “A Universe of Stories” for 2019:

“TALK TO AN ASTRONAUT”

Article in the 2019 April Cherry Juice

If you missed it, please go back and read the article in the
April 2019 Cherry Juice:
http://cherrylandarc.com/?wpfb_dl=264

There are more details there centric to the Cherryland ARC and Amateur Radio components to this in the Cherry Juice article.

Some of you also may have seen the presentations at a few CARC Board and Regular meetings.

The Cherryland ARC has donated money to the effort, and the team is also grateful for other efforts of generosity to make sure the contact is a success!

It is with deep regret that I inform you of the passing of Beverly Stoner, K8ZJU.

If you were licensed as a ham in Northern Michigan from the 1980s until recently, there’s a very good chance Beverly (and her late husband Marion) may have been a part of the Volunteer Examiner team. She was a member of the Cherryland Amateur Radio Club along with several others, and “led the charge” for many years promoting Amateur Radio and being an exemplary steward and example of the high quality and caliber of operators we all hope to some day be.

Here is a link to and a copy of the Obituary from the Record Eagle.

April 22, 1927 – February 26, 2019
Beverley May West was born April 22, 1927, the first child and daughter of Ira Gordon and Ada May West in Kalamazoo. She grew up there, attending Milwood Public School and Western State High School, where she graduated in 1945.

She then became a central office operator for Michigan Bell Telephone Company and worked there and in Port Huron after her marriage to Marion J. Stoner on March 8, 1947. A son, Thomas Gordon Stoner, was born to her on April 12, 1950 and a daughter, Mary Anne Stoner, on July 18, 1953. She lived in Marysville, Detroit and Dearborn Heights while the family was growing up and was very active in the Girl Scouts of Metro Detroit.

She obtained her amateur radio license in 1961, being assigned the call sign of K8ZJU, and was very involved in handling messages for service personnel during the Vietnam War. She returned to the commercial field in 1972 by joining R.L. Polk & Co. in their Taylor office as a market planner.

After a move to the Lansing area, she attended Lansing Community College to study energy efficient housing. This information was used in designing their retirement home.

She worked for the U.S. Government during the census year 1980. She then became an office manager for Wright Line, Inc. and the substitute office manager for her husband at American Microwave and Communications. She was also a private contractor doing computer entry for Sparrow Hospital in Lansing.

Beverley died on Feb. 26, 2019 in Ann Arbor, having been predeceased by her parents; husband Marion; brother, Arthur H. West; and daughter-in-law, Catherine Stoner.

A funeral will be held at 1 p.m. Tuesday, March 12, at the Jowett Family Funeral Home, Benzonia, with Pastor Dinah Haag officiating. The family will receive friends from 11 a.m. until the time of the service.

It is with deep regret that I inform you of the passing of Joe Panyard, K8DT.

Joe passed away unexpectedly on Friday evening following complications from a medical procedure.

Joe has been a long-time active member of the club, so there will be a more complete notice accompanying the information we receive.

Please keep his family in your thoughts and prayers.

Today it is the shades of grey that determine the day on the Grand Traverse Bay. Joseph Leo Panyard Sr. passed away March 1, 2019.

Awaiting him in heaven to go fishing and have a picnic in the dunes are his parents, George and Lolita Panyard; brothers, George and Francis; sister, Harriet Herr; grandson, Kyle Alspaugh; and the many friends he’s loved who have gone to heaven before him over the years.

He journeyed through life to the beat of his own drum while talking on his ham radio. He was an adventurous young man, hitchhiking to Seattle to see the World’s Fair and joining the U.S. Navy to proudly serve his country.

He married his sweetheart; they built a home for their young family with their very own hands. Together they raised their three children with fierce passion.
He was a dedicated son, brother, father, grandfather, great-grandfather, uncle and friend.

Joe loved sailing, cross country skiing, swimming, picnics on the beach and taking adventures with the love of his life, Dee. His greatest joy was his grandchildren and great-grandchildren.

He was known to his neighbors as Hello Joe and Mr. Joe, the fun neighbor who always had a smile a conversation, a cookie, a beer or a cigar, depending on your age and preference. These past years you could find Joe sitting at the fire pit in his backyard chatting with friends, talking on his ham radio or working in his picture framing shop. For many years K8DT would welcome the morning on his ham radio to all of his friends, “It’s a great day today on the Grand Traverse Bay.”

Today it is with tears in our eyes, love in our hearts and memories we share that determine our way as we say goodbye to Joseph Leo Panyard. This summer the Panyard family will host a celebration of his life fish fry on the weekend of his favorite holiday, Fourth of July.

For anyone who would like to send a memorial, Joe loved the amazing parks and lakes of his home state, Michigan. His favorite organizations were Inland Seas at https://schoolship.org/ and Herman Community Park in Suttons Bay at http://www.suttonsbayparks.org/herman_community_park.php/.

Please feel free to share your thoughts and memories with Joe’s family at his tribute page at www.reynolds-jonkhoff.com.

The family is being cared for by the Reynolds-Jonkhoff Funeral Home and Cremation Services. 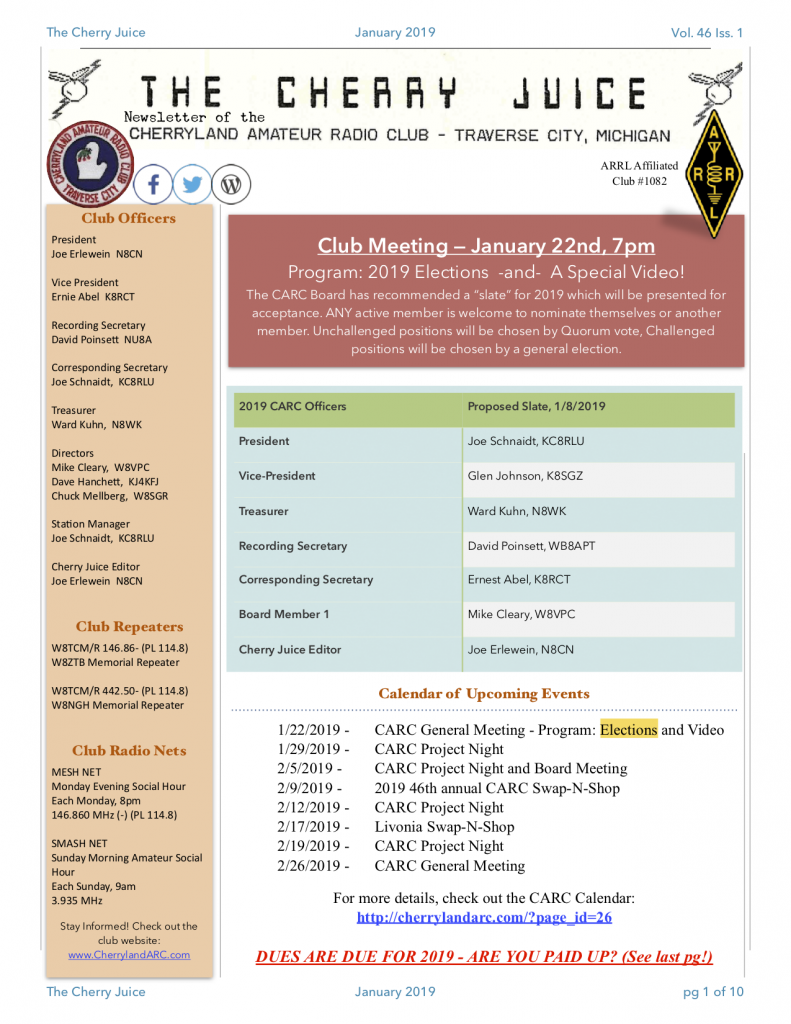 As always, you can visit the Newsletters Page to download historical issues of the Cherry Juice!